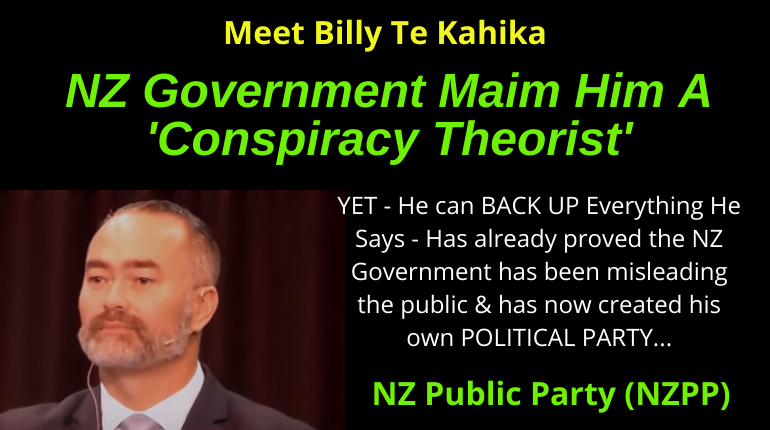 In recent months the name Billy Te Kahika has become a known name across New Zealand and internationally.  Billy openly talks about his educational & family background, and why he thinks our current government is lying about the Covid-19 virus.  The NZ Government is maiming him a Conspiracy Theorist, yet much of what Billy is saying can be credibly backed up.

While others of you simply haven’t, or don’t know how to look for (research) into Billy’s allegations, or know where to look for the correct information, so you can make an informed decision about what the real truth is.

One thing I have learned is:

NEVER believe something is a CONSPIRACY Theory
Until you have looked into it deeply.

Many ‘so-called conspiracies’ over the years have been proven (often decades later) to be factual, and these findings are  NOT  usually publicized through mainstream media (or if they are it is a very brief statement that flashes on the TV News for a second or so, so many viewers miss the context of it anyway). 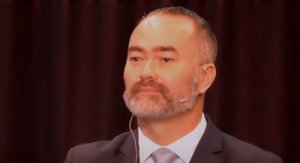 This includes the (re: in video below) fact that leaked information Billy received Prior to July 11th 2020 this year about: (1) A Lockdown to happen in AUGUST 2020 with Military staff being given the rights to forcibly take citizens from their homes to a government quarantine facility without their consent, (2)  Covid 19 testing without your consent, and military checkpoints to be implemented in various areas around the country – ARE NOW HAPPENING IN NEW ZEALAND.

He also mentions that the Covid-19 virus could be part of a (or generated through a) biological weaponry system (I have included documentaries later in this article about these), as a way for the governments to gain control and take more rights and freedoms off the people, including eventually making vaccinations mandatory by bringing in laws such as:

The leaked information (documents) given to Billy were from a Military person stating the military have been put on standby since March 2020 to do the above, and to set up checkpoints across the country with the NZ Police to stop people leaving various towns in AUGUST 2020. See Video blow…

In the short time since the lockdown in March 2020 Billy has formed his own political Party – New Zealand Public Party (NZPP) and has joined forces with Jami Lee Ross in the Advance NZ Party.  He has also been calling on other small political parties in NZ to join forces with them to take on the bigger political parties…..

The New Zealand Public Party is a Freedom and Democracy Movement for the people.  They believe a government should be transparent and accountable for their actions with laws put in place to ensure this happens.

NZPP have strong values and believe decision-making legislations and human rights should be up to the people to vote for – NOT just decided upon and rushed through by the government without the public having a say – which is what our current labor government are doing.   You can learn more about what the NZPP Party stand for Here.

At the beginning of this video above Billy gives a good description of himself, his expertise, and how and why he became suspicious of what the NZ Government is telling us about the Covid 19 virus.

As someone with an investigative background, Billy started to research his concerns during the March 2020 lockdown.

KEY POINTS TO NOTE – VIDEO ABOVE

42 minutes into video:  He notes that these Covid 19 lies are a way for governments to fully implement (bring in) the United Nations Agenda’s 21 & 2030.

These agendas lead to The Government controlling:

47 minutes into video: He explains why he thinks the narratives (reasons behind the Covid 19 virus are a hoax.  Please note: Billy is not saying the virus itself is a hoax.)

48 minutes into video: He explains how many credible professors and doctors around the world have come forward stating that the Covid 19 virus is not a crisis, and is in-fact less harmful than the common flu (noting here that many people die each year from the common flu).


Here is just one of many videos by Dr John Ioannidis Professor of Epidemiology at Stanford University (mentioned in the video above) whom is one highly respected epidemiologist that has confirmed the public has been misled.
————————————————-
NZ SCIENTISTS SPEAK OUT
Billy also mentions an expert in New Zealand,  Dr Simon Thornley
whom is leading a bunch of New Zealand scientists that have stood up to our government and told Dr Ashley Bloomfield they are WRONG, and has mirrored much of what world expert Dr Ionnidis has said.  You can learn more about Dr Simon Thornley and his scientific team on their website – COVID Plan B.

55 Minutes into video:  Billy explains why we should be worried about the Covid 19 Health Response Bill (in particular the enforcement laws) and how it takes away more of our Human Rights as it allows an authorized  person (including a Police Constable) to:

IMPORTANT NOTICE  – Released on the 15th August 2020 via the Advance NZPP face book page.  NZ Parliament say ‘They CAN Vaccinate you without your consent’.

61 minutes into the video: Another bill, the ‘Internet Filtering Bill‘ that is set to be passed in parliament early 2021.  This will mean the government can force you to take anything you have written (if they don’t agree with it, or want people to know about what you have written), off the internet or off your website, and/or to filter who can see it.

(Author note – This is certainly another stab against our freedom of speech and again is a way for the government to stop NZ citizens from being able to make informed decisions via research on the web.

There is no doubt that something needs to be put in place to stop the spread of pornography, and the spread of hate speech/acts such as the spread of footage and hate speech in regards to the Christchurch Mosque shootings earlier in 2020, but the Internet Filtering Bill allows the government to apply this law to anything they don’t agree with – Re video above).

Mainstream media continue to taint Billy and his newly formed political Party, ‘ New Zealand Public Party‘ (NZPP) as conspiracy theorists – EVEN though much of what he has said on the 11th July 2020 has happened.

Please Note here New Zealand – The more that Billy Te Kahika and his team speak out and question the current government’s decisions, the more they (and the media) will twists truths and accuse Billy and his team as being conspiracy theorists.  It is a common tactic that is applied by those that have something to hide.  A bit like the bully in the playground)!

Billy has a lot of credible information on the NZPP website an active NZPP facebook page with updates and live streams almost daily, about what is going on.  He is not shy to say what he thinks and listens to what the people want.

Educated – Credible activists and New Zealanders that feel things are not tying up (or that we are being lied to) in regards to what our current government is telling us about the Covid 19 pandemic, are hailing Billy Te Kahika as a hero, and backing him 100%.

Billy Te Kahika has mentioned he has concerns about the Covid-19 virus being part of a (or generated through a) biological weaponry system.

Such weaponry systems do exist.  Biological weapons are real and have been used on the public by governments and/or governmental departments for decades, so there is good reason to believe that the Covid-19 virus could in-fact be an act of biological warfare on public citizens.

The video below will give you a history of this…

Dr Barry Trower a former Secret Service Agent, talks about Radiofrequency/microwave and Biological Weaponry Systems – what they can do, and confirms they have been used on the public for decades.

These systems also fall into the category of NON-Lethal and Directed Energy weaponry systems, and have been used on the mainstream public in various ways for decades – You can learn more – Here.

Governments, their intelligence agencies, contracted companies, and various other associated governmental departments have done and do, do inhumane acts, and often have ulterior motives in regards to what they claim to be factual, but cover it up and hide this information under the banner – CLASSIFIED INFORMATION and the Official Secrecy ACT.

Credible and highly educated Whistleblowers and activists from all over the world have exposed and/or spoken out about many of these abuses, but are often stopped from appearing on mainstream media because silence bans are put in place.

This is no different from what we are seeing in regard to the COVID 19 information.  Governments are currently trying to make us believe that what they say is true and maiming people that don’t agree with them, or question them on it as Conspiracy Theorists, like they have tried to do to Billy Te Kahika of the NZPP Party (Noting here that some of what Billy has said has happened since he exposed it).

To add to it is the issue of the NZ government also bringing laws in to stop and force citizens to take articles, posts, or anything they have written or filmed (that the government does not like, or goes against what the government says ) off the internet , so the mainstream public cannot research the truth for themselves.

Well New Zealand, all the above is a big warning that our rights will be taken away completely if we don’t speak out and have a government that is transparent, accountable and listens to what the people want.

Our current government has made/passed many new laws without asking us what we think, or caring about what we think or want.  I don’t believe what they are doing is in our best interests.

This article is NOT about me trying to tell you what you should believe or do, or who you should vote for in the upcoming NZ 2020 Election.  It has been written to give you a place to start your own research, so you can make a more informed decision for yourself.

Please do your research so you can make an informed decision about the future of your rights as a New Zealander and your country.