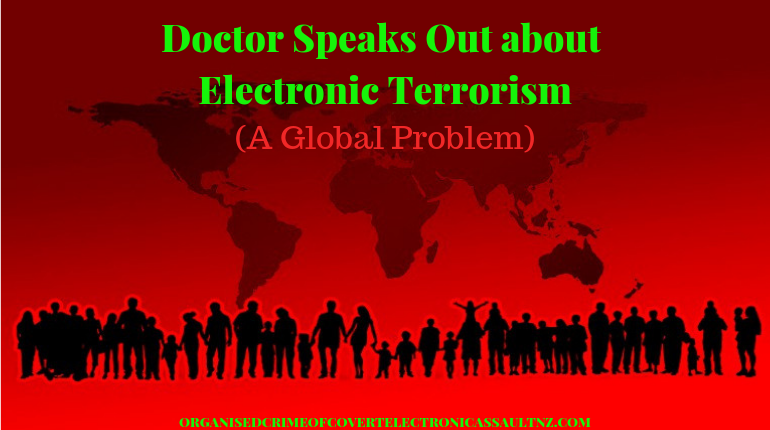 Victims of Electronic Terrorism (Known as Targeted Individuals) are often shunned and maimed as mentally ill by those in the mainstream medical professions.

As time has gone on various doctors and persons in associated positions have either fallen victim to electronic terrorism, or had a friend or loved one become a victim, and been prompted to do their own research into what is really going on.

Dr John Hall Speaks Out On The Richie Allen Show

Doctor John Hall, a practicing physician in Texas, specializing in anesthesiology and pain management, is one such doctor that had a close friend (a girl he had previously been engaged to) tell him about bizarre but scary things she was experiencing.

Because John knew her well, he didn’t feel she had any form of mental illness, so started to do some research into what was happening to her.

He published her story in his first book A New Breed – Satellite Terrorism In America to get her experiences exposed.

What John’s former fiance was explaining was a classic case of what victims of Electronic Terrorism (also known as Electronic Harassment) experience.

Eg: Hearing voices in their heads, and unexplained pain in their bodies, that they believe is penetrated electronically from external locations: Being watched/followed a lot, Having regular break-ins (with no proof of a break-in), Vandalism and/or items moved in their homes or on their property – For a more in-depth summary see Electronic Terrorism Summary

In the video above Dr Hall explains a bit about his research that lead him to the history of the United States Government conducting a system of research in the late 1950’s to 1960’s called MKULTRA.

What they were looking for in this research program (MKULTRA):

Was a way to remotely control human beings brains, so they could induce altered states/personalities known as Manchurian Candidates so they could send a person out on secret assignments:

Get the person to kill, do a bombing etc, without the person remembering what they had done once they are switched back to their normal personality.

An ideal state to accomplish in soldiers on secret missions..

A good book to read that goes into depth about this is ‘The Search For The Manchurian Candidate‘, written by journalist John Marks.  The book is based on 15,000 pages of CIA documents obtained under the Freedom of Information Act.

If you prefer to watch a video, the History Channel did an excellent documentary about these horrific research programs – See ‘Mind Control – America’s Secret War‘. ​

They succeeded in being able to wipe the human mind slate, create a new personality, create an alias the person didn’t realize they had, that could be triggered by a particular noise, command or phone call.

In the 1970’s the United States Government got caught doing these barbaric acts on innocent individuals, and an investigation by the Rockefeller Commission was able to prove some of it from the few documents that hadn’t been destroyed previously, via Freedom of Information documents.
The MKULTRA program was then ordered to be shut down – Read more

As Technology Progressed – So Did The Abuse
Of the Human Mind

However  – The program never shut down – It went more underground – Covert!

Today a person doesn’t have to be drugged or taken to a laboratory to be tortured or turned into a Manchurian Candidate, it can all be done from a remote distance, via sophisticated electronic systems.

How Is This Possible?

In the 1970’s The U.S. government woke up to the reality of psychotronics when from 1960 to 1965 the American Embassy in Moscow was targeted by a mixture of electromagnetic and microwaves, causing a wide range of physical and mental illness among U.S. personnel serving there, including the eventual death of the U.S. Ambassador. Dr Stephen Possony, one time Science Advisor.

​From the information found, researchers had realized the brain is highly susceptible to the electromagnetic (radio frequency) energies, and that the EEG of a persons brain could easily be manipulated/entrained to create various states in a person including: Rage, anger, depression, memory blanks, confusion, physical pain, as well as being able to manipulate organs of the body to mimic various illnesses and/or conditions.

Instead of putting a ban on electromagnetic weaponry systems, the U.S government looked at it as a good tool to control the human mind, and continued the research on innocent unwitting people, now known as Targeted Individuals.

The radio-frequency energies are delivered to an individuals brain via systems usually referred to as (DEW) Directed Energy Weaponry systems.  Gwen towers, Cell towers, Satellites and WiFi can also be used.

The frequencies and systems used to attack the human mind/brain are largely kept under the banner of ‘Classified Information’, and only those with clearances can access them.

It is also important to note:

This is going on worldwide, and is not just happening to people in the United States.

Frequencies are invisible making electronic harassment the perfect crime.  No one can see it being done, and it leaves no trace behind.

Dr Hall took measures to find out who was targeting his former fiance, and was able to prove a private investigating group, owned and operated by a former FBI agent, whose son was a high ranking (DOD) Department Of Defense Official were doing it.

They had the clearances and the access to the technologies.  Yet they were NEVER arrested as they were protected by the government!

When Richie Allen asked Dr Hall, ‘Did the perpetrators confess to what they were doing to his former fiance when he confronted them?’,  Dr Hall reveals they didn’t confess and soon after made a few attempts on his life:

His latest book takes a deeper look into the abuses of these technologies, and is also well worth reading: Guinea Pigs: Technologies of Control.

That will be displayed as a movie.  The movie is being named, TARGETED’ and is based on Dr. John Hall’s Internationally acclaimed book ‘A New Breed – Satellite Terrorism In America‘.
If you would like to help make the movie eventuate – You can Donate here